AUSTIN, Texas (6 May 2017) – Sunday saw a roller coaster of emotions for Change Racing at Circuit of the Americas, as the team earned their second victory of the weekend to take a sweep of the Lamborghini Super Trofeo North America events but retired early from the Advance Auto Parts SportsCar Showdown (Round 4 of the 2017 IMSA WeatherTech SportsCar Championship) due to mechanical issues.

Drivers Corey Lewis and Jeroen Mul both had been looking forward to their return to the five-year-old Formula One venue – Lewis for a return to a place that held many positive memories, and Mul for the chance to translate a Lamborghini street car ride-and-drive into an express trip around the 20-turn, 3.4-mile track in the No. 16 XBOX Forza / Monster Energy / Orion Lighting Lamborghini Huracán GT3.

Monster Energy Athlete Lewis qualified in fourth position as the team continued to show progress in the 15-minute session, only to find himself in the middle of a Turn 1 melee on the first lap of the race. 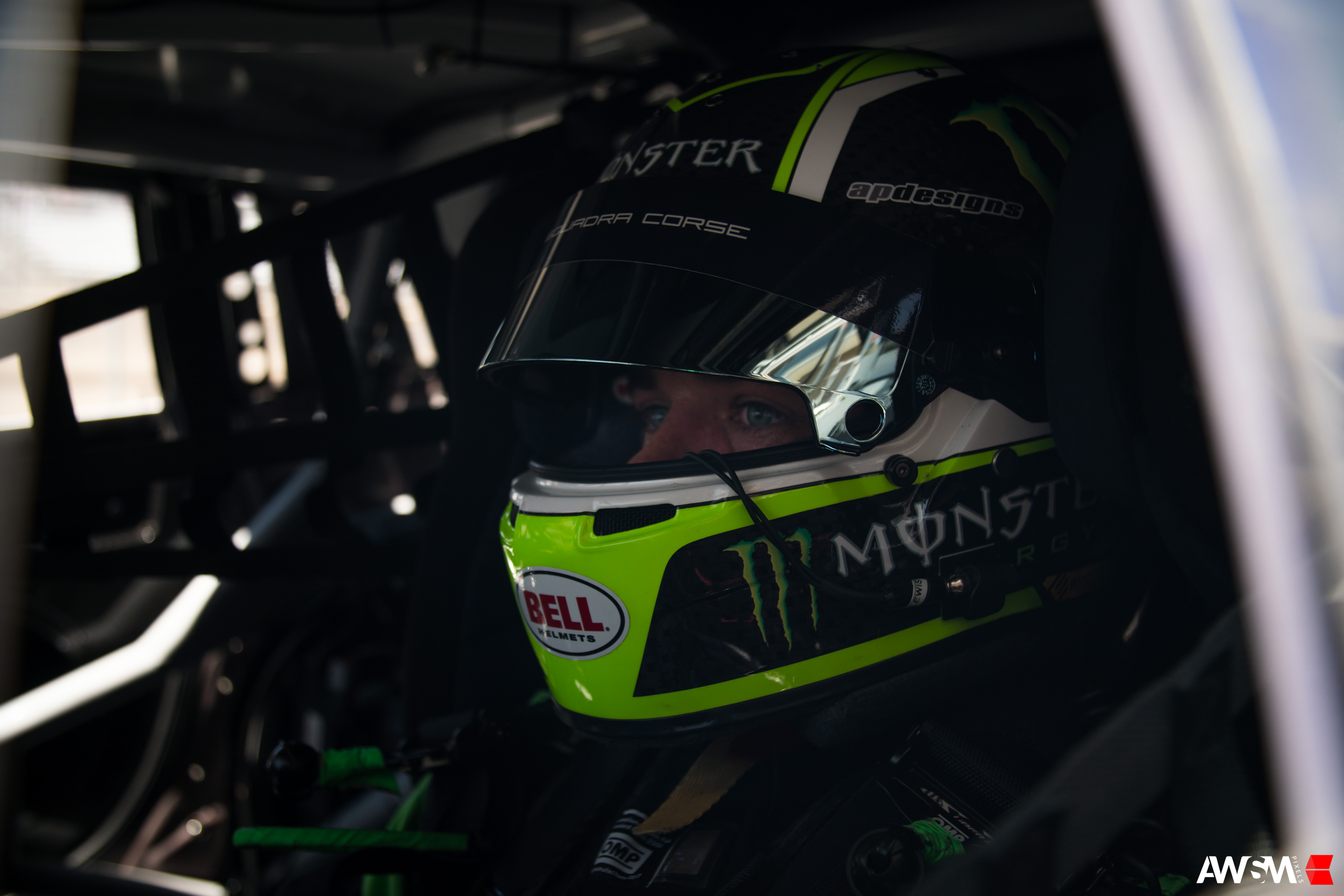 Clipping a stalled GTLM car, Lewis maneuvered his GT Daytona class entry away from the Turn 1 fracas with limited damage. Fighting the increasingly slippery conditions in the Texas heat, Lewis held onto fifth position before pitting for fuel, tires and a driver change. Mul took the wheel 50 minutes into the two hour and 40-minute race, only to experience a drivetrain issue on his second flying lap.

The team made a remarkable driveshaft change – completing the swap in an incredible 30 minutes, but the issue proved to have residual effects and the car had to be retired.

Despite the final results, the team takes plenty of positives from the weekend.

“I got a good start,” said Lewis. “I had an open lane to the inside when everyone fanned to the outside (in the first turn). The next thing I know, one of the GTLM cars had collided with another and parked in the middle of the track. I made a split-second move to the outside but just clipped the left front fin on the bumper. Thankfully there wasn’t that much damage. The car handled well as everyone settled into a rhythm even though the track got much greasier. We had a great driver change and the rest is history.  But there are plenty of positives to take away from this weekend. We dug deep as a team and never gave up, which is a motto of this organization. We just need a bit of luck on our side, and hopefully Detroit has some of that for us.”

“It’s unfortunate,” said Mul. “It was a great pit stop and driver change. But as soon as I got into my first full lap, the revs suddenly jumped up as I went through the Esses, and I lost drive. The team worked really hard to get us back out there – I’ve never seen a driveshaft changed that fast. Unfortunately, that didn’t fix the problem. But we’re keeping our heads up and we’ll focus on Detroit, which will be another new track and new place for me. It will be cool.”

Earlier in the morning, Richard Antinucci completed the sweep in the Lamborghini Super Trofeo North America season opener, taking his second victory of the weekend from the pole position for the 2014 and 2015 Super Trofeo World Champions. Young Austin Versteeg got close, but in the end Antinucci was never seriously threatened despite a full course caution mid-race, when teammate D. Bryce Miller found the Turn 1 sand after experiencing brake issues.

Antinucci was jubilant with the result and the possibility of bringing home another series championship for the team.

“This feels awesome!” said Antinucci. “I love Change Racing and the guys at Lamborghini Carolinas. To get two wins in two races is great; I hope we can continue! I had a great start on cold tires and on the restart so we had a very fast sprint car. But Versteeg did a great job, he gave us a run for our money but I had the pace when I needed it. It’s a different kind of discipline, being out on your own. You have to make sure to stay focused and not to let your mind wander.”

“Today didn’t end the way we would have liked it to,” said Miller. “But overall I’m really happy with the weekend. I’ve made some progress in understanding the car and how to drive it. I felt I was controlling my pace well. I didn’t make any mistakes, and the team gave me a great car. I’m looking forward now to getting to the next race. I’ve made some good steps, both within myself and with the team so I’m looking forward to getting to a track that I know and applying the lessons I’ve learned here.”

For Team principal Robby Benton, it was understandably difficult to sum up the range of emotions the team experienced on Sunday.

“The car was the best it had been all weekend,” said Benton. “The guys did a good job giving us what we needed, fighting for balance. The race pace was good – though it’s difficult to hold pace with some of the other manufacturers right now, but hopefully that will come around. Our goal was to run our own race, not worry about things out of our control and at the end of the day, know that was the best we could do. Unfortunately, a failure in the drivetrain took us out of position to do that. We’ll take it back to the shop, figure out what happened and come back strong at Detroit.

“On the Super Trofeo side, Ritchie (Antinucci) drove two great races – maintaining good pace, managing his tires and managing the gap in his mirrors which made it possible for him to run only as hard as he had to. He had good starting positions and led flag-to-flag so it was just up to us not to make any mistakes. We couldn’t have asked for it to go any better. But I’m heartbroken for Bryce: I think he was in position to get a podium finish for both races, only to see his hopes dashed each. We’ve never encountered the failure that happened today in several Super Trofeo seasons, so we want to sort out the cause.”

Next up for the Change Racing team will be the 100-minute Chevrolet Sports Car Classic June 2 – 3 from Belle Isle, Michigan.

After earning Team and Driver Championships in 2013, 2014, and 2015, the team grew in 2016 to also campaign in the IMSA WeatherTech Championship with the Lamborghini Huracàn GT3 in GT Daytona (“GTD”) Class competition. The team enters 2017 with a promising young driver line up with Corey Lewis and Jerome Mul sharing the driving duties on the No. 16 Monster Energy / XBOX / Forza / Windows 10/ Pertamina Lamborghini Huracàn GT3. Change Racing will also make its 5th consecutive  Lamborghini Blancpain Super Trofeo campaign as the team looks to extend its record of achievement in the category.