Watkins Glen, N.Y. (1 July 2017) – It has been a busy weekend at Watkins Glen for Change Racing, with practice and qualifying for the IMSA WeatherTech SportsCar Championship team as well as practice, qualifying and two races for the Lamborghini Super Trofeo squad.

The team will start seventh in Sunday’s Sahlen’s Six Hours of the Glen for Round 6 of the 2017 IMSA WeatherTech SportsCar Championship with the No. 16 XBOX / Monster Energy / Orion Lighting 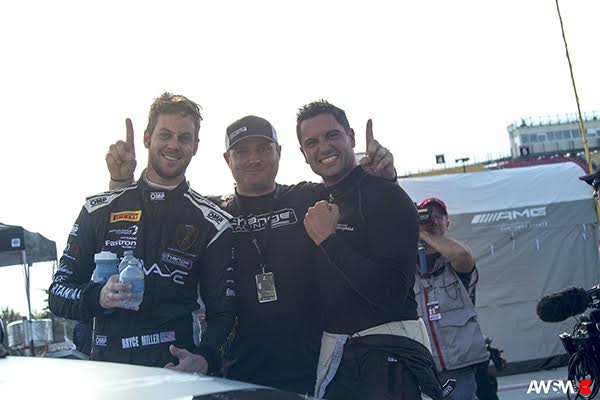 Lamborghini veteran Richard Antinucci came into the weekend on a roll, sweeping both victories last month in the season opener in his No. 16 Lamborghini Huracán Super Trofeo. Series rookie D. Bryce Miller continued to make gains in the No. 34 Huracán, qualifying fourth in the Pro-Am class for Race 1 and third for Race 2.

The first race of the weekend marked the first time the series had raced on the legendary 3.4 mile, 11-turn road course since the track was repaved in late 2015. 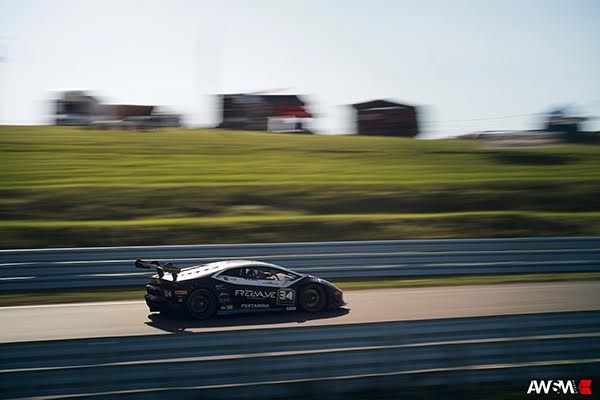 driving a perfectly paced race for a third victory.

“It’s actually difficult when you’re out in front by yourself, especially at a place like this – such a big, open track,” said Antinucci. “You have to pace yourself and keep your mind from wandering. My concern today was that we didn’t race here last year, so we haven’t raced on the new surface. We didn’t know how tire wear would be. So I pulled enough of a gap that we were clear on the pit stop and just managed the situation from there. We’re three for three! I love this team – (team principal) Robby Benton and the Change team have taken care of me since last winter at the World Finals and we’ve won five out of five American rounds so far! “

Miller started fourth in the Pro-Am and gained spots in the mandatory 98-second pit stop, driving a steady race in only his third Super Trofeo event. Miller finished second in class and fifth overall for a special podium finish, four years after his last professional race. 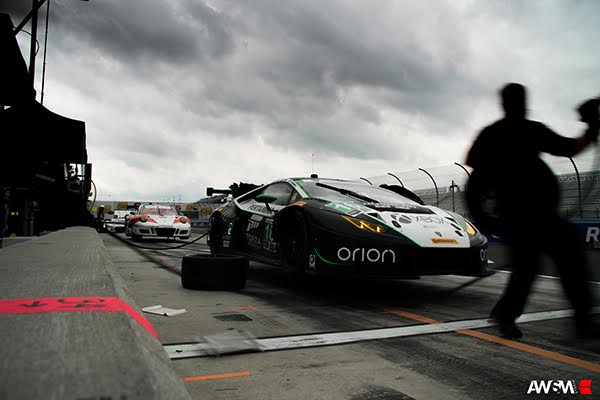 “It’s been a while – actually, Friday was four years to the day since my last race before my pseudo-retirement,” said Miller. “To make my return to the podium here is very special. There were a lot of cars having issues in race one so when I heard I was P2, I just put it in conservation mode, to bring it home and score some points. We’ve improved each session so even though we’re a bit behind right now, I know we can contend for the championship in the end. The team and Ritchie (Antinucci) have been great to work with – he’s one of the best in the business so it’s great to have him as a teammate. I learn something each session. I can’t thank the team enough, they’ve done an awesome job and have been so helpful getting me back out and up to speed!”

“Friday was a day where everything went well: there were no issues, no mistakes and the race went smoothly for both cars,” said Team Principal Robby Benton. “Bryce (Miller) did a great job in only his second Super Trofeo event so to see him stand on the podium was a reward. And Ritchie does what Ritchie does. He’s money in Super Trofeo cars and starting from pole, we knew if he could get a good, clean start and not have any issues he should lead flag to flag. He just had to manage his own race, take care of his equipment and we’d be able to celebrate a win.” 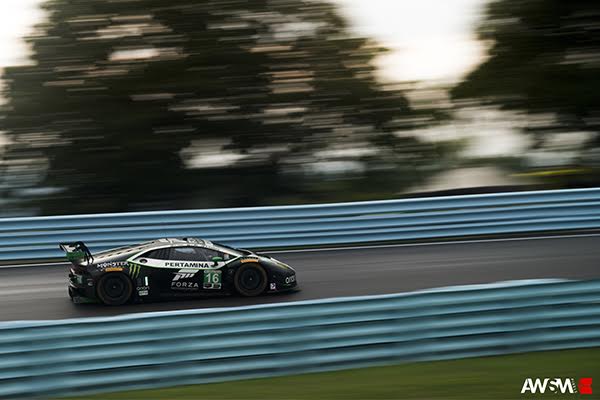 qualifying thwarted by an untimely red flag as the team looked to continue their run of strong qualifying results.

Following a wet practice Saturday morning that garnered little in the way of useable information, Lewis set out for the 15-minute qualifying session, steadily improving his times and setting up a gap in traffic for two flyer laps. Unfortunately, the red flag came out with three minutes remaining, nullifying what could have been his quick lap and ending qualifying early. The team will start seventh with a quick lap at 1:47.774-seconds.

Benton and Lewis were understandably disappointed with the result, but cognizant of the fact that anything can happen in a six-hour race – and usually does.

“We had just started what would have been two flyer laps when the red flag came out,” said Benton. “We’ve had a good qualifying average with Corey (Lewis) all year but this being a six-hour race, where you start can be somewhat irrelevant. Obviously, everybody wants to go for pole but if we could have qualified in the top three, I’d have been happy but anything other than that – fourth or 10th – really doesn’t matter. We have some work to do on the car especially since we lost the third practice session because of the conditions. We didn’t really get anything constructive out of it so we’ll use the results here as another practice, work through morning warm up tomorrow, and I think we’ll be okay.”

“The red flag just came out at the wrong time,” said Lewis. “We were picking up time in every sector as the session went on and were trying to manage the gaps on track. Those last two laps were set to be the “money laps” as it were. Obviously, we want to be further up the time sheet, which is where we’ve been all weekend long, but it’s a long race and qualifying position doesn’t matter as much as it does in a sprint race. We have time to maneuver through the field and I have confidence in the team that we can pull it off and go for a good result. I’m looking forward to tomorrow!”

Saturday closed with the second round of Super Trofeo action on the weekend, with Bryce Miller scoring third in the ProAm ranks, while Antinucci suffered some bad racing luck when a hub broke as the championship leader suffered his first dose of bad racing luck so far this season.

Miller fought through some issues to score his second podium of the weekend.

“The Change Racing car was awesome all weekend long – I can’t say enough what the team has done to help get me up to speed,” said Miller. “It was a crazy day, but earning double podium this weekend really means a lot. I had some good battles today, including a bit of “rubbing is racing” to lose third position in Turn 1. But I put my head down and chased him down for P3. We really too another step this weekend and I know we’ll be fighting for the top step at Road America. But it was strange – my left leg had some issues for much of the race, feeling pins and needles. I had to switch between left and right foot braking. I’ve never experienced that before and hope I never do again!”

Watch the Sahlen’s Six Hours of the Glen on Sunday, July 2nd starting at 10:00 AM ET on FS1, with continued coverage from 1:00 – 4:30 PM ET on FS2. The race can be seen internationally on IMSA.com with coverage from IMSA Radio.

After earning Team and Driver Championships in 2013, 2014, and 2015, the team grew in 2016 to also campaign in the IMSA WeatherTech Championship with the Lamborghini Huracàn GT3 in GT Daytona (“GTD”) Class competition. The team enters 2017 with a promising young driver line up with Corey Lewis and Jerome Mul sharing the driving duties on the No. 16 Monster Energy / XBOX / Forza / Windows 10/ Pertamina Lamborghini Huracàn GT3. Change Racing will also make its 5th consecutive  Lamborghini Blancpain Super Trofeo campaign as the team looks to extend its record of achievement in the category.