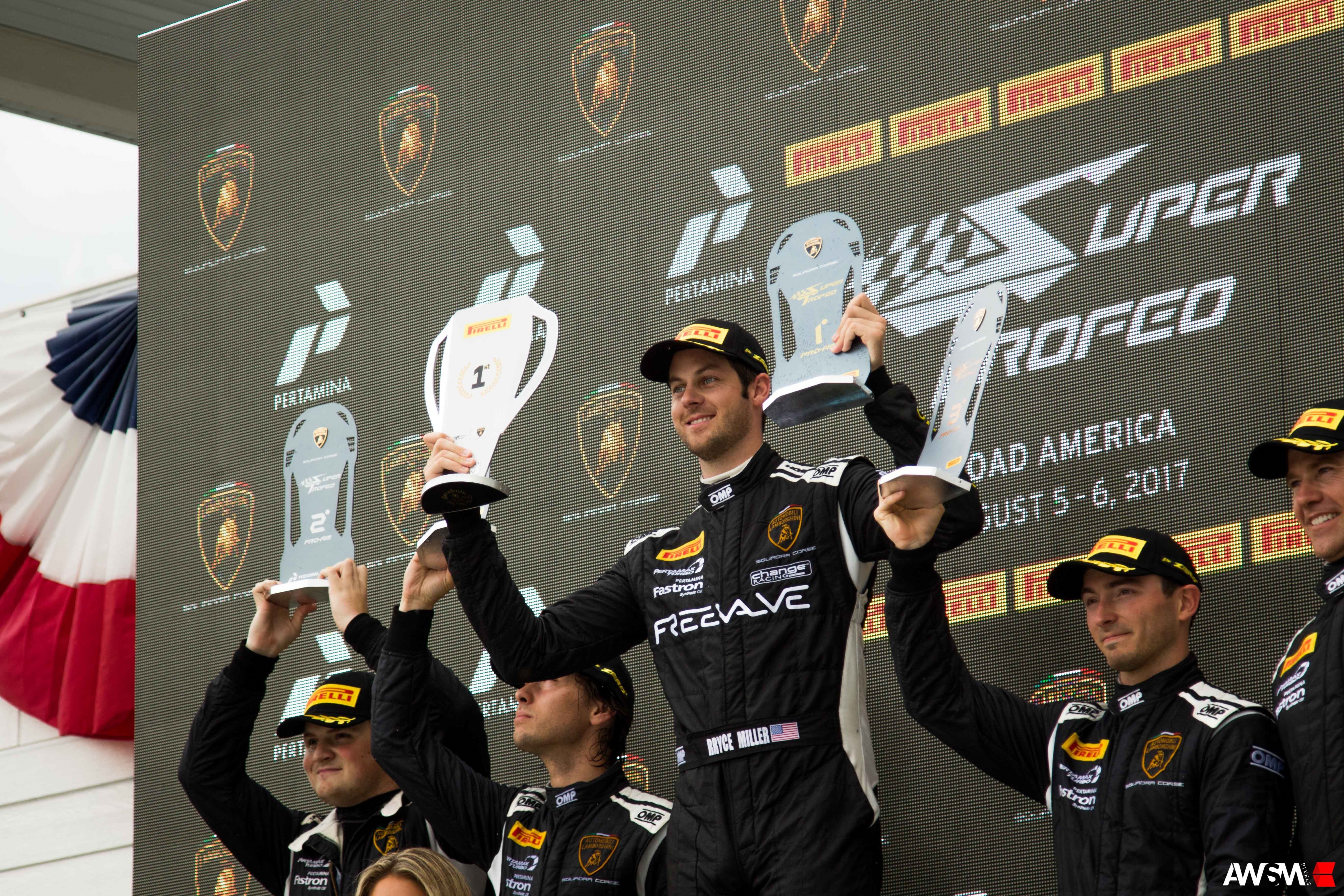 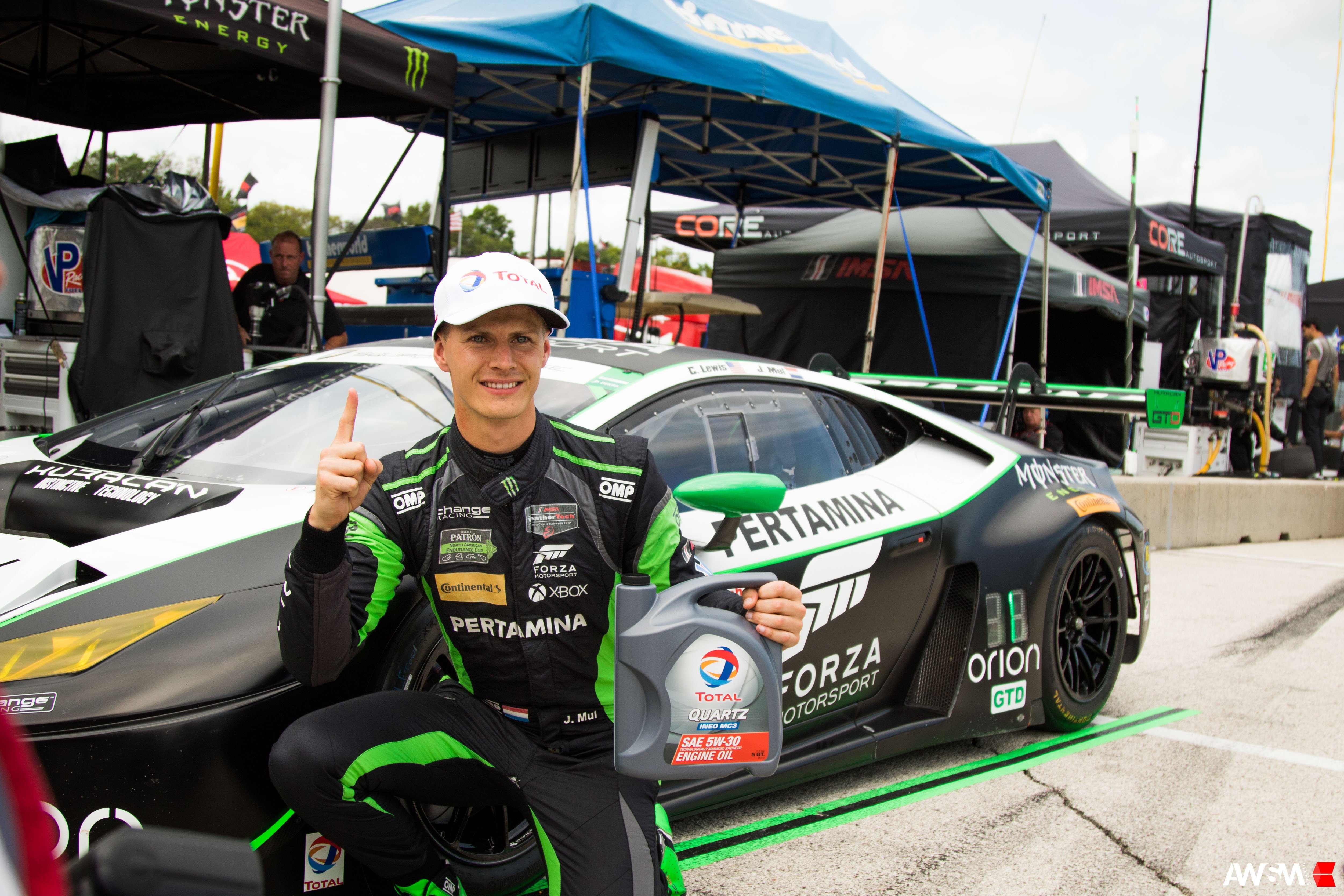 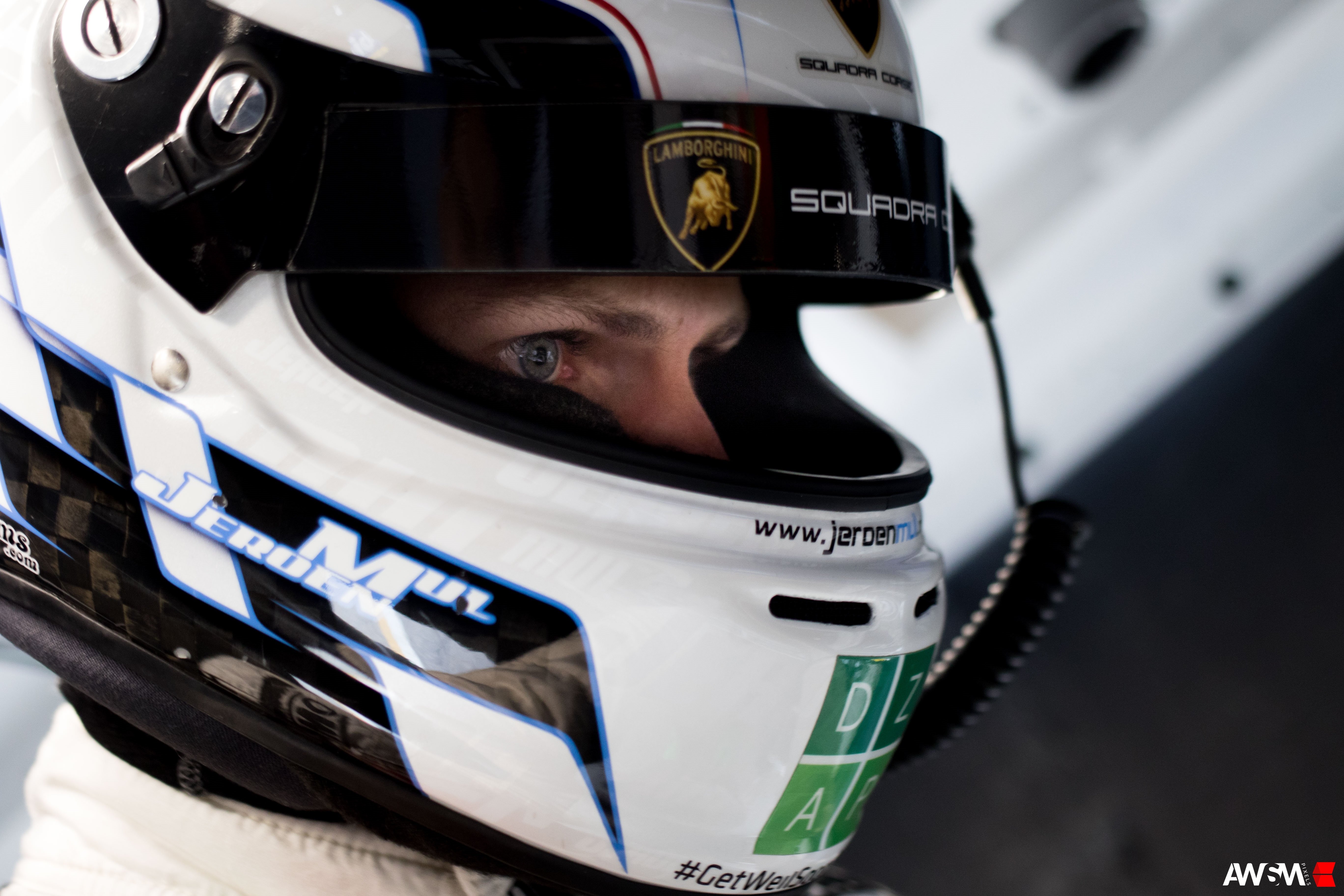 Changing up their strategy of having Lewis qualify and start, and Mul finish each race, the team chose to
set Mul behind the wheel for qualifying, setting themselves on a strategy today that will hopefully pay off tomorrow. It also affirmed the young Dutchman’s ability to quickly learn new tracks – the fact that Road America’s 4.048-mile road course is the longest the series races on all season made Mul’s apparently easy learning curve that much more impressive. 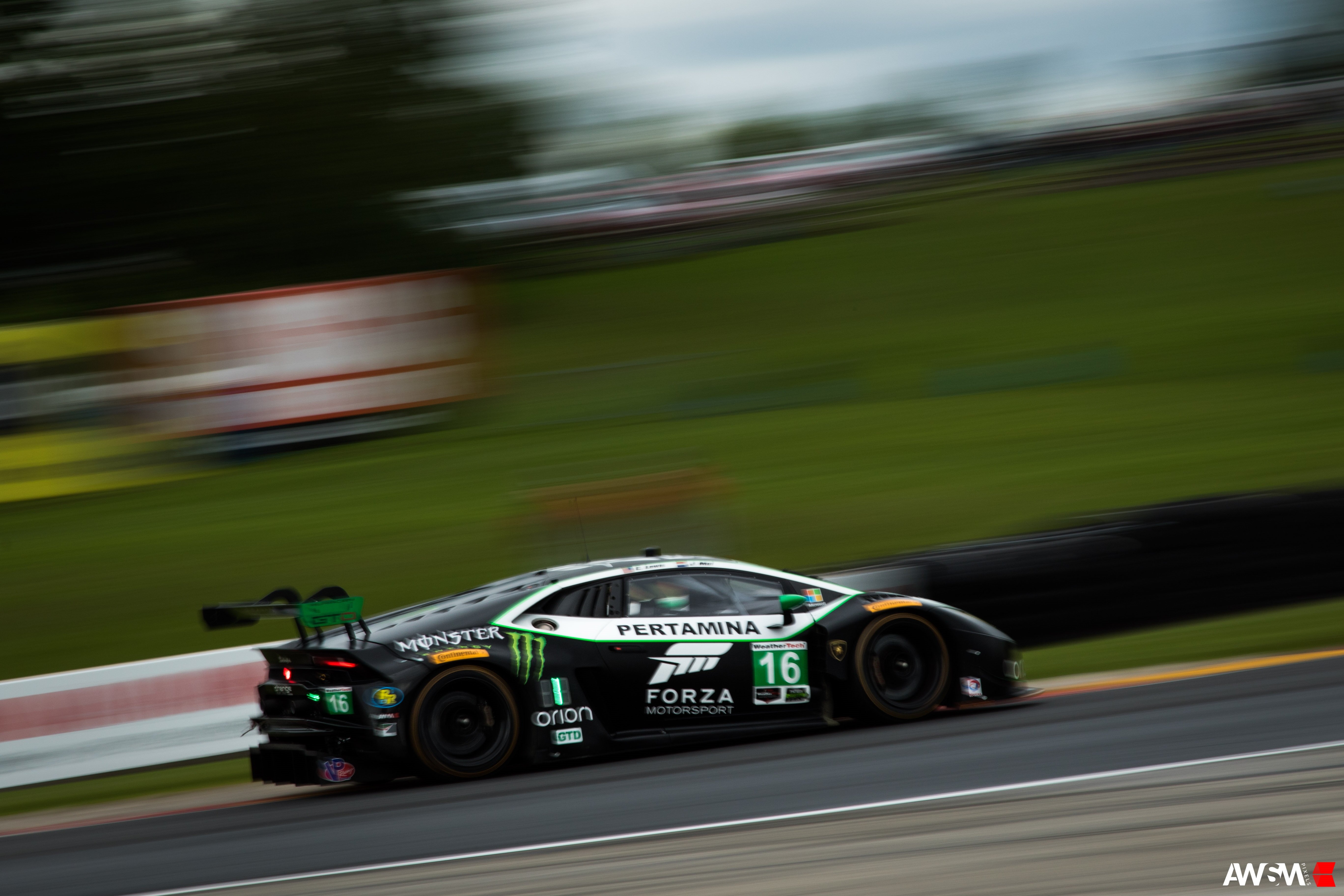 Working hard on his out-lap to set a gap between himself and traffic up ahead, Mul set the team’s quickest time of the weekend and put himself on the pole on his third lap. With the team urging him on as his time was bested, he set a new quick time of 2:06.649-seconds on his fifth lap – good enough to hold off the GTD class competition and earn his first pole position in the series. 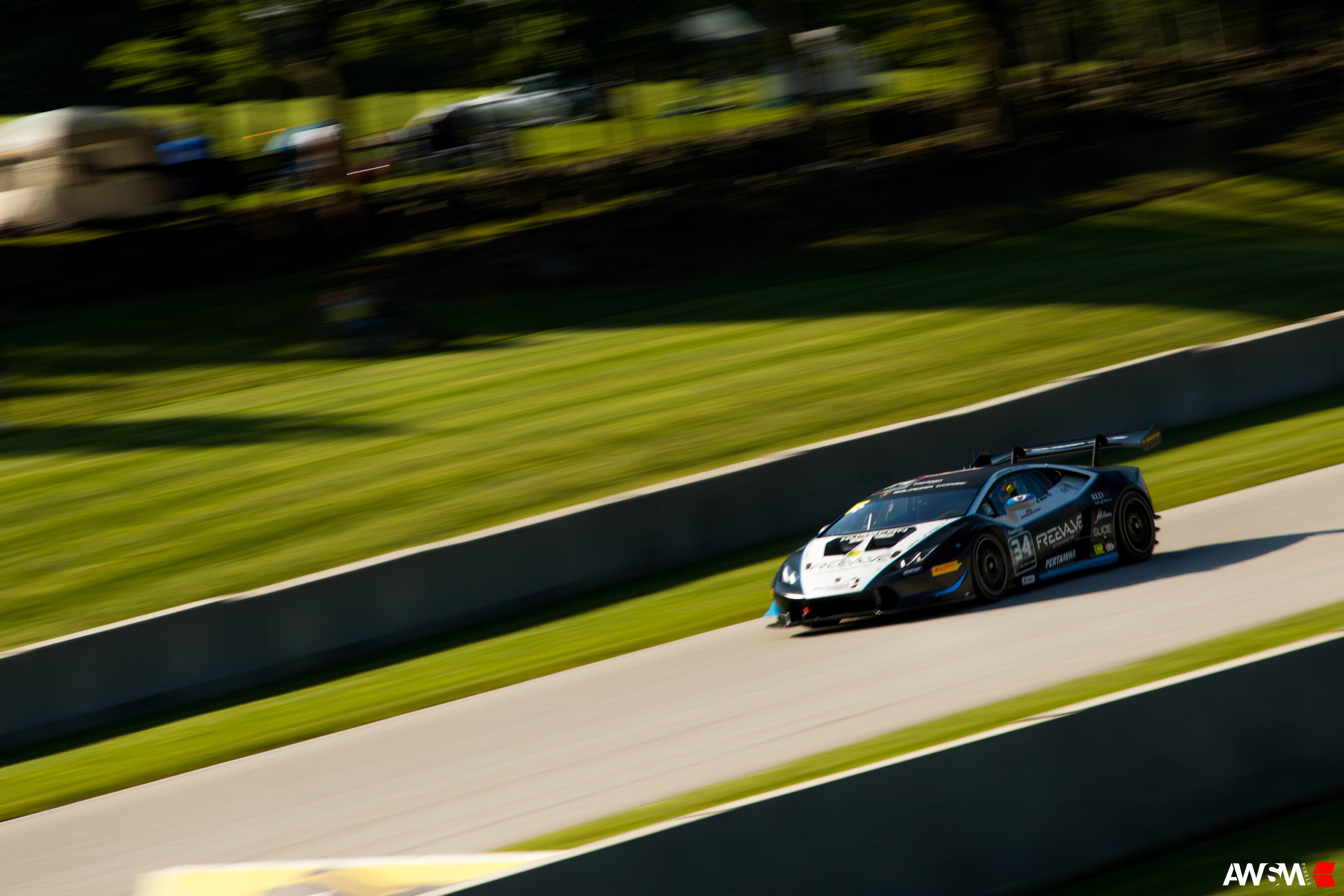 Later in the afternoon, Change Racing’s Lamborghini Super Trofeo team took to the track, with drivers Richard Antinucci and Bryce Miller competing in the 23-lap event. Antinucci, the series championship leader, started second in the Pro class and third overall, while Miller took the green flag from the third position in Pro-Am. But on the pace lap, Antinucci was hit from behind, damaging the rear of the car. Shortly after the green, the pair came together again, sending Antinucci to the pit lane three times – to change the right rear tire and to straighten the steering.

Meanwhile, Miller passed for position at the start and settled into second position in Pro-Am and fifth overall, with his eyes on the lead and a long-awaited victory. Returning to P2 after the mandatory pit stop, Miller reeled in the leader to take his first series win since returning to racing earlier this season after a four-year hiatus.

Jeroen Mul
“It’s amazing. This is my first time racing at Road America and only my second time qualifying this season. I have to give it to the guys at SimDelft in the Netherlands, who have really helped me to get ready for all these racetracks. It’s really paid off! The car was good from the start this weekend, we’ve just been fine-tuning in each session. We went out on a new set of tires for qualifying and it was all hooked up. We’ve learned a lot, especially over the last couple of races. The car is good in both wet and dry conditions so we should have a good race car. We’ve been struggling this year so to be on pole is very special to me and to the entire team.”

Corey Lewis
“It’s been a long time coming. For whatever reason, the racing gods have been a little tough to us this season. But we don’t give up and today was the perfect example of that. We struggled a bit in morning practice, made some changes and went out and gave it all we had for qualifying. We exceeded our expectations and this goes a long way, for us and for our sponsors – especially since this is the home of Orion Lighting (based in nearby Manitowoc). We’re glad to do this for Lamborghini as well, since it seems the other manufacturers were getting so much attention! It’s a great way to start the race. The weather Sunday looks a bit iffy but rain or shine, we have a fast race car. It’s awesome for Jeroen, for the team – it’s finally our day.”

Bryce Miller
“It feels fantastic – it’s been since 2012 that I’ve had a win! Our goal this season has been to keep making steps in the right direction and we have. We lost the promoter test day to weather and our first dry session was qualifying this morning so we had no idea where we would be. But the team worked really hard and gave me a great platform. I picked off a couple of guys and get to P1 and I’m thrilled about that – for the team and for myself. But the goal remains the same, to just keeping making strides forward, aim for that overall podium and be ready for the Lamborghini World Finals.”

Richard Antinucci
“I had an overly enthusiastic driver behind me who hit me three times on the formation lap, damaging the diffuser. We had a dice into Turn 2, then I had the slipstream into the next corner and tried to pass him in Turn 5. He turned in on me too late and it compromised both of our races. We had race-winning pace even with the broken suspension. The team did a great job to keep me out there so we’ll get her fixed up and go at it from pole tomorrow.”

Team principal Robby Benton
“We didn’t know what to expect going into GTD qualifying because we’d been good right off the truck, but that was in wet and intermediate conditions. Today was the first time we’d been in dry conditions on a new set of tires. Neither driver was completely happy and we knew we needed more, but the engineers made some good decisions, the mechanics got everything done and – plain and simple – Jeroen went out and did his job and perfect one at that. We’re proud of the entire team. We made a strategy decision to qualify Jeroen based on what we think is going to happen tomorrow and we’ll be right or wrong. We won Saturday, so let’s see if we can win Sunday.

“On the Super Trofeo side, we just couldn’t be happier for Bryce (Miller). He drove a smart race and took advantage of the opportunities that were out there to get his first win in a Lamborghini. He’s adapted to the car really well and learned very quickly, so we’re excited to see what the rest of the season has in store. We’re disappointed for Ritchie (Antinucci), but he is starting on pole tomorrow so we’ll cross our fingers that the weather cooperates and we can get him the win and the championship points.”

After earning Team and Driver Championships in 2013, 2014, and 2015, the team grew in 2016 to also campaign in the IMSA WeatherTech Championship with the Lamborghini Huracàn GT3 in GT Daytona (“GTD”) Class competition. The team enters 2017 with a promising young driver line up with Corey Lewis and Jeron Mul sharing the driving duties on the No. 16 Monster Energy / XBOX / Forza / Windows 10/ Pertamina Lamborghini Huracàn GT3. Change Racing will also make its 5th consecutive  Lamborghini Blancpain Super Trofeo campaign as the team looks to extend its record of achievement in the category.